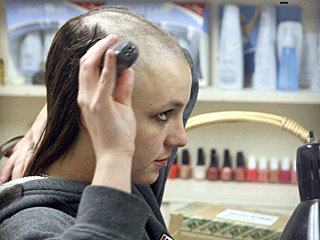 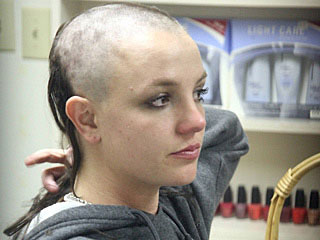 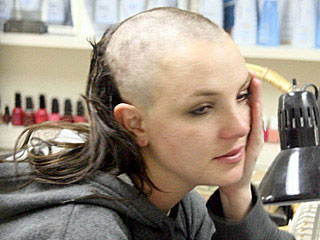 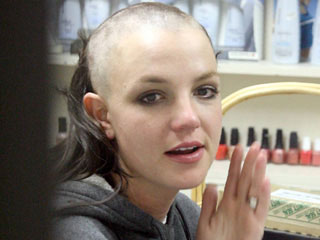 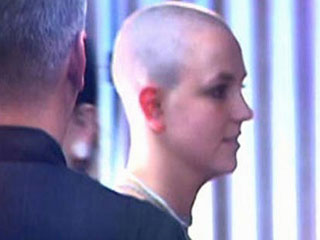 Los Angeles, February 17, 2007 – Britney Spears appeared in a tattoo parlor in the San Fernando Valley with her head shaved completely bald. Eyewitness News shot video of the newly shorn Spears, with tiny tattoos on the back of her neck, sitting for a new tattoo, a pair of red and pink lips, on Friday night.
« She just wanted something real small on her wrist, something dainty, » Max Gott, the tattoo artist at Body and Soul in Sherman Oaks, said. « She got some cute little lips on her wrist. »
Before heading to the tattoo parlor, Spears grabbed an electric clipper and shaved her own head at a San Fernando Valley salon Friday night, it was reported.
« I tried to talk her out of it. I said, ‘Are you sure you’re not having a bad day and tomorrow you’ll feel differently about it? Why don’t we wait a little bit? »‘ salon owner Esther Tognozzi said. « She said, ‘No, I absolutely want it shaved off now.’ Next thing I know, she grabbed the buzzer and she went to the back of my salon and she was shaving off her own hair, » Tognozzi said.
Source

This website uses cookies to improve your experience while you navigate through the website. Out of these, the cookies that are categorized as necessary are stored on your browser as they are essential for the working of basic functionalities of the website. We also use third-party cookies that help us analyze and understand how you use this website. These cookies will be stored in your browser only with your consent. You also have the option to opt-out of these cookies. But opting out of some of these cookies may affect your browsing experience.
Necessary Toujours activé
Necessary cookies are absolutely essential for the website to function properly. This category only includes cookies that ensures basic functionalities and security features of the website. These cookies do not store any personal information.
Non-necessary
Any cookies that may not be particularly necessary for the website to function and is used specifically to collect user personal data via analytics, ads, other embedded contents are termed as non-necessary cookies. It is mandatory to procure user consent prior to running these cookies on your website.
Enregistrer & appliquer
MORE STORIES